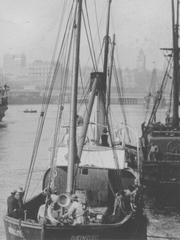 Stella Maris (formerly The Apostleship of the Sea) is the Catholic Church’s Missionary work to the seafarers whether they be on merchant, passenger, war or fishing vessels. While the Church has always been interested in seafarers since Christ first gathered his fishermen-disciples around him, the modern movement began in the 1890s with several isolated and independent beginnings.

In 1891 the Apostolate of Prayer first posted devotional magazines and books from Wimbledon College to 12 ships and began enrolling seafarers in this pious association. The seafarer section eventually became known as the Apostleship of the Sea.

Two years later, The Society of St. Vincent de Paul commenced visiting seafarers in the ports of Bristol, Sunderland, and Tyneside. In the same year a Catholic Seafarers’ Centre opened in Montreal – ” a snug little kingdom up two pairs of stairs”

In 1920, Catholic port ministry was started and developed in Glasgow, Scotland, by Archbishop Donald Macintosh, Arthur Gannon, and Peter Anson, who were concerned about the lack of witness the Church was showing aboard ship.

Two years later they approached Pope Pius XI who bestowed his blessing on the ministry and encouraged the Apostleship of the Sea to extend its mission to the oceans and shores of all the hemispheres. The Apostolic Constitution of 1952, “Exsul Familia” raised the Apostolate from special work of the St. Vincent de Paul to an official, missionary work of the Church. Its headquarters moved to Rome.

In every major country, a Bishop serves as the AOS Episcopal promoter, overseeing the work of the national director. It is the director’s responsibility to co-ordinate the individual chaplain’s efforts and to assist them in developing their ministries.

Additionally, the National Director’s office serves as a communication centre which produces a newsletter, establishes and maintains rapport with organisations protecting the seafarer’s interests, and appeals to the dioceses for port chaplains.

Each country hosts an annual conference. Tying all these national conferences together is the Pontifical Council for the Pastoral Care of Migrants and Itinerant People, now called the Dicastery for Promoting Integral Human Development.

Because Stella Maris’ (the Apostleship of the Sea’s) “parishioners” move around the world, it is necessary that their pastors be in touch with one another. The World Congress held every five years (last one in Gdynia, Poland, 2007) mandated by the Apostolatus Maris office at Palazzo San Calisto, Vatican City, ensures this connection between the countries, and updates and disseminates the commission’s policies. The recently scheduled International Centennial celebrations conference in Glasgow, UK (Oct 2020) was cancelled due to the pandemic. 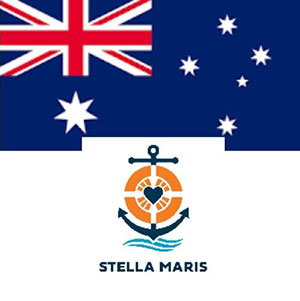 Stella Maris (formerly The Apostleship of the Sea), is the Catholic Church’s ministry to seafarers around the world which officially started in Glasgow, Scotland in 1920.

In 1905, Seamen’s Conferences started in Brisbane and in 1906, they started in Sydney. Other port parishes followed.

Later, in 1922, Pope Pius XI approved the first constitution of the movement, known as Apostleship of the Sea. Initial work included visiting Catholic seafarers, providing them with literature and bringing them in contact with the Catholic priest. Praying for seafarers was a strong practice those days. 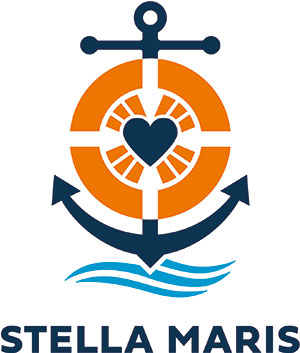 Our charitable service offering and Catholic foundations are expressed in the symbol itself as well as the name “Stella Maris”. The elements within the symbol characterise our mission. The anchor symbolises Hope: when the anchor is dropped at sea, it holds fast to keep the ship and crew safe - just as we hold fast to our hope in God to keep us safe. The lifesaver symbolises Faith: when a seafarer falls into the sea, they put their trust in the lifesaver to save them - just as we put our faith in god for eternal salvation. The heart symbolises Charity: the heart of Christ is full of love for all - our charitable works are animated by the love of Christ. The rays of light symbolise the Light of Christ: the light emanates from the Heart of Christ (the heart), shines towards our Faith (the lifesaver) and is rooted in Hope (the anchor). And finally, the waves of the sea mark the environment for our mission - a source of livelihood for seafarers, but also a reminder of danger and death. Accepting and believing in Faith, Hope and Charity leads seafarers and their families to the safe harbour of Heaven.