Bishop Norton’s pastoral ministry as a member of the Society of the Divine Word has been varied, including outreach to diverse members of the community, some on the fringes of society.

He said those who work in the oceans can also often be vulnerable.

“Stella Maris provides support to seafarers who regularly face the loneliness of being away from family and friends for long periods and the hardship of work on the ships,” Bishop Norton said.

“They can often be invisible, but our port chaplains and seafarers’ centres help them know that people care for them deeply.

“I am looking forward to working with the team towards a more just and peaceful life for sailors who are often working long hours under extremely difficult conditions, bringing goods and services to many parts of the world,” he said.

“Stella Maris managers and chaplains had to adapt their methods of serving the pastoral and welfare needs of the seafarers that come into Australian ports during this time,” she said.

Mrs Rajasingam said the ministry has also been financially affected by the pandemic as churches were closed during the annual Sea Sunday fundraising campaigns and donations have been significantly reduced.

Stella Maris Australia is currently working with the Anglican ministry Mission to Seafarers and the Commonwealth Government to ensure a sustainable future for the operational and welfare services that support seafarers.

It is also preparing for local and international events to celebrate the work they undertake. An event in Glasgow, Scotland next month will commemorate the centenary of the Catholic Church’s ministry and affirm the dedication of those serving in ports around the world.

“Bishop Bosco was a strong advocate for those who work on the oceans and for providing leadership and support to those who minister to them,” Mr Collins said.

On 26 February, Saturday evening at around 9.00 pm, Lee-Anne Diano (Manager), Seamus Quinn (President) and June Villadolid (Ship Visitor), all from Stella Maris Melbourne, pulled off a co-ordinated task and vaccinated eleven (11) crew on the TSL Rosemary ship that docked at the Melbourne Port.

The event took days of preparation, endless phone calls and met many hurdles. Seamus recorded one hundred and eighteen (118) phone calls in the three (3) days prior to the vaccination campaign.

Approval from Border Force was only received the day before as they were waiting for the written approval from The Department of Health and Human Services, Victoria.

Seamus contacted Adam Reilly who was a commander at the Centre from The Department of Families, Fairness and Housing during the operation at the centre last year. Adam was on holidays but responded to Seamus’ plea by attempting to contact Jeroen Weinmar. He got hold of Brett Sutton who then referred the request to Dr Rachel Heenan, Senior Medical Outbreak Lead, Victorian Department of Health.

She then set out to get approval, with many conditions listed, one being that the crew needed to have Rapid Antigen Tests (RATs) done prior to going down the gangway. Eleven (11) RATs were located from various sources.

During the day, Lee-Anne had to complete an on-line vaccination course to be able to administer the vaccines. This also cost the team a few hours of time. June prepared two buses with barricades, safety cones, trestles (some had to be bought  that day), PPE, water for the seafarers, chairs, lights, and other resources while still in contact with the Ship Captain and crew making sure they had their Individual Healthcare Identifier (IHI) numbers from Services Australia, and that MyGov registrations were ready. There were some issues due to the fact that some seafarers do not have permanent addresses and are using multiple names (some had four names listed).

The Captain was extremely helpful and co-ordinated the RATs on board with his crew. At the same time, Dr James Quinn drove to his clinic to prepare and draw the vaccines, making it easier for Lee-Anne, a Registered Nurse, to administer. He created a mobile vaccination pack, including resources to cater for any anaphylactic issues, sharp containers, needles and swabs.

During the day, face shields were purchased from a local chemist. Eventually, ‘all systems were go’ and the crew got their vaccines. Needless to say, the Captain and crew were delighted and could not thank Stella Maris Melbourne enough for their efforts.

After the task was complete, Dr Quinn (with the help of June) then started registering the seafarers’ vaccinations onto the Government website. He then made sure that the seafarers were going to get a printed copy of their vaccination Certificate. All the tasks were completed at around 11.20 pm.

Meanwhile, Dr Rachel Heenan will organise her Maritime team to work on a brief Vaccination Guidance document which the team can utilise in the future.

“At this point of the pandemic, when Australian citizens are being urged to take their boosters, thousands of seafarers are still waiting for a chance to get vaccinated in one of the ports they are visiting. These seafarers who have worked so hard during this pandemic to provide supplies have not been considered as key workers by several companies and governments. Stella Maris Melbourne has certainly assisted in easing the worries of some seafarers in the current situation.” 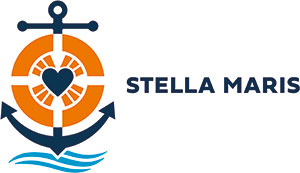